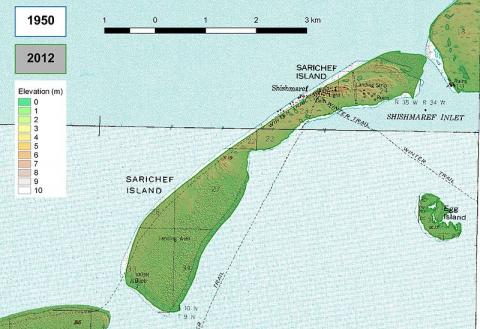 Location of Shishmaref and elevation change

Alaska is one of the least populated states with 13% percent of its population identifying as Alaskan Natives (Huntington, 66-74). These native people depend economically, nutritionally, and culturally on hunting and fishing for their livelihoods ("National Climate Assessment" 2014). Alaska has approximately 33,904 miles of shoreline and more than 3,000 rivers of which encompass the most vulnerable coastal communities (US Government Accountability Office). Alaska is home to 40% (299 of 566) of the federally recognized tribes in the United States.

It is the largest state in the union bounded on three sides by saltwater bodies including the Beaufort and Chukchi Seas to the north, the Bering Sea to the west, and the Gulf of Alaska to the south (Chapin). Since 2003, Federal, state, and village officials have identified 31 native villages that face imminent threats, 12 of which have decided in part or entirely to explore relocation options (US Government Accountability Office).

The focus of my research is the village of Shishmaref which is located on Sarichef Island in the Chukchi sea just north of the Bering Strait (Alaska Climate Change Impact Mitigation Program). It is the central part of the southwest-northeast-oriented Shishmaref Barrier Island chain along the Chukchi Sea. The sandy Shishmaref barriers extend more than 60 miles and include several lagoons. The Sarichef Island itself is a barrier island approximately 0.25 miles wide and 3 miles long (Shishmaref Strategic Management Plan). It is largely formed by frozen sandy soils. It is 5 miles from the mainland, 126 miles north of Nome and 100 miles southwest of Kotzebue.

Over the past 60 years the state has warmed more than twice as rapidly as the rest of the United States (Chapin). Being the United States’ only Arctic region, the cold-adapted features and rapid warming are already pronounced. Shishmaref is an Inupiat village that has occupied its present location for more than 4,000 years, practicing fishing and subsistence lifestyles (Alaska Climate Change Impact Mitigation Program).

In Shishmaref, high rates of erosion along the shoreline is a result of melting permafrost, loss of perennial sea ice, sea level rise is (AECOM Technical Services). Erosion is the result of thawing permafrost and can be exacerbated by intense storms, wave and slough erosion, and sea ice gouging (Shishmaref Strategic Management Plan). Permafrost near the Alaskan Arctic coast has warmed 4-5 degrees at 65-foot depth since the late 1970s and 6-8 degrees at 3.3 depth since the mid-1980s (NCA 2014). With permafrost temperatures in Alaska rising, more than 70% is vulnerable to subsidence upon thawing. 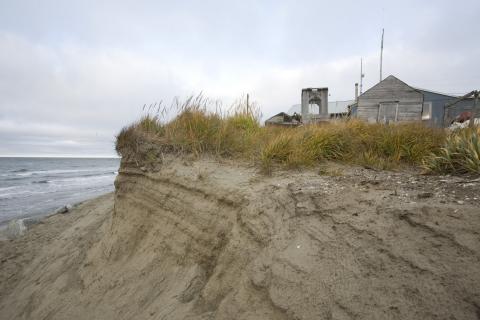 www.grida.no/resources/1137 This photo has been graciously provided to be used in the GRID-Arendal resources library by: Lawrence Hislop

Sea ice is receding faster than previously projected and is expected to virtually disappear before mid-century. Sea ice is frozen seawater that floats on the surface of the ocean and perennial sea ice is essential for coastal communities who are vulnerable to greater wave action and higher storm surges.

Since 1979, perennial sea ice has declined as a result of extended periods of above-freezing air in addition to ocean currents and wind patterns. The lowest sea ice extent on record was recording in September of 2012 as 49% below the 1979-2000 average for that month (EPA). Both permafrost and sea ice along the shoreline play an important role in protecting coastal communities from extreme weather caused by fall and early winter storms. Reductions in sea ice also increase the amount of the sun’s energy that is absorbed by the ocean causing a negative feedback loop that allows warmer oceans to melt more ice. This increase in air temperature and ocean warming influences atmospheric circulation and patterns of precipitation (NCA 2014).

Sea level rise occurs from an increase of fresh water into the ocean due to melting sea ice and glaciers and from thermal expansion of seawater from warming temperatures. During the past 50 years, the sea has risen 8” or more in the United States coastal areas (NOAA 2010). and it is projected to rise between 0.18-0.59 meters (7.08”-23.2” or 0.6’ to 1.9’) by the end of the century (IPCC 2007). Scientists have a high confidence of 90% that global mean sea level rise will be at least 8 inches and 6.6 feet by 2100 (NCA). More than 8 million people live in areas at risk of coastal flooding in the United States.

The southern Chukchi Sea located is microtidal and ice covered for up to 9 months a year. Despite this, the Shishmaref barriers are a wave-dominated system, subject to storm waves during open water season which starts in June or early July and can extend through November (Owen).

Prevailing coastal currents along the barriers are from southwest to Northeast the result of both geostrophic inflow from the Bering Strait and tidal currents. However temporary reversals in current direction occur under the influence of storms. These storms that start from the southeasterly side and can shift to the northwest side causing the island of to be hit twice from one direction and then another all effects from a single storm.

Since 1969, the city of Shishmaref has lost over 200 feet of land to severe storms causing high tidal surges, sea level rice, melting permafrost, wind erosion, warmer winter ocean temperatures, and late forming protective sea ice. According to Louise Farquharson who is an arctic geologist at the University of Alaska Fairbanks, Sarichef Island lost an average of seven and a half feet of land a year to erosion between 2003 and 2014. 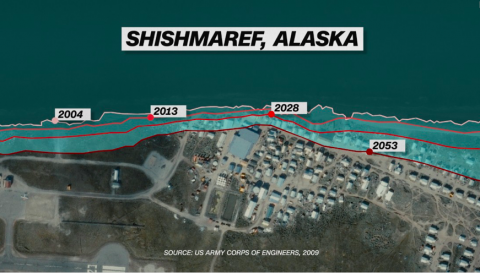 This photo identifies where the coast was in 2004 and where it is expected to be in 2053 due to coastal erosion from the melting of permafrost, severe storms, and the absence of sea ice. Sea ice is a natural barrier that protects the community from storm surges so as sea ice continues to form later in the season and thaw earlier the community becomes more vulnerable to storm surges. Currently coastal sea ice forms a month later than it did when satellites began routinely monitoring in 1979. As a result, during the prime storm season in the fall, Shishmaref is exposed to storms (Thompson).

Erosion in Shishmaref: A Village On the Verge of Extinction

Due to extensive history of flooding and future vulnerability from local topography floods, continual flooding is a hazard. In addition, earthquakes and erosion were designated as hazards due to extensive history. Through efforts by the 2005-2009 US Army Corps of Engineers, many building and infrastructure have been moved to relatively high terrain. Permafrost degradation is accelerated by infrastructure although Shishmaref’s small population of around 610 people has only 150 houses.

At the edge of the City’s center the impacts of storms are undercutting the 15-25-foot sandy dune embankment and past storms have engulfed nearly the entire low-lying parts of the community including the old airport on the east (AECOM Technical Services). The U.S. Geological Service used high-altitude photography and remote sensing along the coastline and compared images from the 1940s to the early 2000s. The results state that most of Alaska’s north coast is eroding at an average of 1.5 meters per year.

The particular vulnerability associated with the inhabitants of Shishmaref is their desire to continue practicing Inupiaq culture and subsistence strategies. Primary challenges faced are political, economic, and environmental. The current threat to these subsistence strategies is due to ice forming late, remaining thin, and breaking apart earlier. The bluer the ice the more stable it is for traveling in pursuit of walrus or seal (AECOM Technical Services).

Climate change has brought changes in snow and ice, new species, and altered migratory patterns. Although certain marine animals are still plentiful, the hazardous traveling conditions are preventing substantial food supply. Percy Nayokpuk a local from Shishmaref says that hunting conditions have changed a lot in his 65 years, but he is encouraged that younger hunters are adapting to new conditions. This is exemplified in purchasing drones to scan different colors in the ice for precaution (AECOM Technical Services), The traditional environmental knowledge that the Inupiaq culture provides about ice and ocean monitoring is important to incorporate in mitigation efforts.

The community was relocated in May 1973 and again in July 2002 due to permafrost-rich ground unsuitable for development. The State of Alaska Immediate Action Workgroup included Shishmaref in their list of six top-priority communities that are at risk. Currently, the group faces the decision on whether they identify a suitable site for relocation or adopt a “defend in place” approach. However in 2016, the majority voted to relocate to the mainland.

The shoreline continues to recede forcing the community to move houses and other structures back from the edge. However, there is becoming less space to do this. In 2005, after yet another large storm the US Army Corps of Engineers built a new stronger sea wall. The community has tried many different techniques to arrest the erosion, including gabions, sandbags, and articulated concrete mats. All of these efforts have provided only temporary solutions.

According to the local hazard mitigation plan: “the effects of climate change are expected to add to natural hazards including flooding in coastal areas. As sea level rises and the offshore ice pack retreats, more coastal flooding can be expected (Shishmaref Strategic Management Plan)."

Vision Statement: "Shishmaref is a safe and resilient community. We want to be a viable community that respects and honors our Inupiat culture and traditional values. We will work together and with partners to develop projects and policies to protect our residents, infrastructure, natural environment, and subsistence resources. We will preserve and enhance our community for us and future generations." 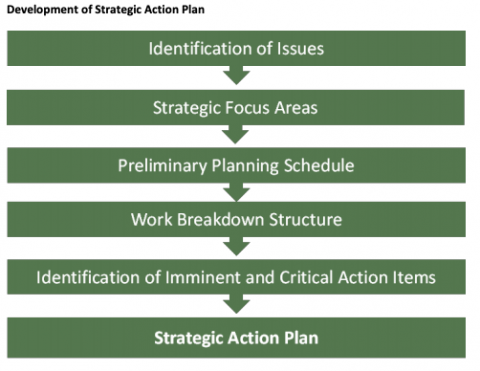 1. Lack of/Inadequate Community Infrastructure: The school and church serve as evacuation shelters but are not large enough to house everyone. The church also does not have running water, emergency supplies, and other necessities. Residents need an evacuation center so they have a safe place to use during and after a storm or other emergency.

4. Extend and Maintain Seawall: In 2005, the USACE designed a seawall to protect critical infrastructure. There are four phases.

5. Lack of Evacuation Shelter/Place of Refuge: Shishmaref is not connected to any roads, in storms planes or boats have a hard time getting there. Key emergency management strategies for increasing Shishmaref’s resiliency include Planning and Preparedness, Education and Drills, Protective Structures.

6. Funding: according to a study done by the U.S. Army Corps of Engineers Alaska District in 2004 called "Shishmaref Relocation and Collocation Study Shishmaref, Alaska Preliminary Costs of Alternatives" the cost of relocation is around $179 million.

7. Water and Sewage Systems: Many homes in Shishmaref do not have access to running water and flush toilets due to the harsh climate conditions. Permafrost keeps the ground frozen for the majority of the year and piped systems are expensive. Bottled water is expensive but common however the average person utilizes 2 gallons of water a day for health and cleaning instead of the healthy 15 gallons. The sewage lagoon is vulnerable to storm surge and erosion and is not protected by the existing rock revetment.

Aerial view of the old runway which is now used as foundation for new houses and a new runway has been re-built lengthways along the island.

www.grida.no/resources/1140 This photo has been graciously provided to be used in the GRID-Arendal resources library by: Lawrence Hislop 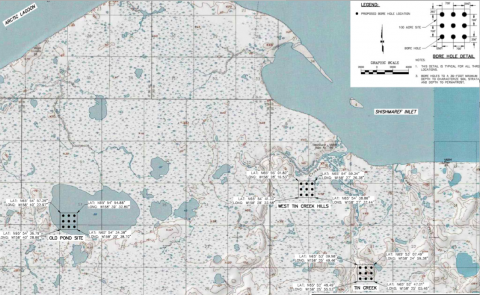 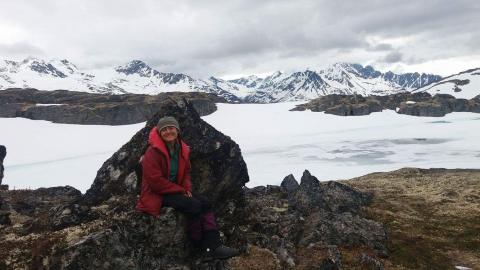 Aleksandra Kostick was an Environmental Science and Anthropology Double major, with an outdoor studies minor. She graduated from St. Lawrence in 2020. This webpage was created for Jon Rosales’ Adaptation to Climate Change class. Aleksandra chose to focus on Shishmaraf Alaska for this project because it connected her two majors well by focusing on the vulnerability of indigenous people and culture and climate change. In the future she hopes to help conserve traditional environmental knowledge and contribute to helping vulnerable communities adapt to climate change.