The Last of the Tuvaluans

Tuvalu is one of many small equatorial islands in the Pacific near Australia (Encyclopædia Britannica). Tuvalu is made up of five atolls and four reef islands (Encyclopædia Britannica). The capital and what is considered the mainland of Tuvalu is called Funafuti where the only airstrip is in the whole nation and it was built by the US military in World War Two (Patel, 2006). The population of Tuvalu is around 12,000 making it one of the smallest nations in the world (Tuvalu population 2022). Because of its location, Tuvalu is subject to a number of different stressors such as economic stressors, food scarcity, and overcrowding (McCubbin et al., 2015). Tuvalu is also subject to changing precipitation patterns, strong winds, and ocean acidification (McCubbin et al., 2015). These are a number of day to day issues that pacific islands face as a result of being such a low lying island. All of the islands fall below five meters above sea level making it very susceptible to climate change despite emitting little to no emissions (Encyclopædia Britannica). In fact Tuvalu actually requested money from the Australian and US governments because the emissions released in their countries are what are causing the seas to rise and flood the islands (Eschenbach, 2004). In 2000 Tuvalu joined the United Nations in hopes of bringing to light how climate change is affecting their home because they felt that their action was limited to their borders (Patel, 2006). This has allowed them to play a vocal role for themselves and for other small island nations who act as living proof for the effects of global warming and carbon emissions (Patel, 2006). At the time Tuvalu had the equivalent of $12.2 million USD which makes joining the United Nations a considerable expense (Patel, 2006). As much as they advocate, their susceptibility has pushed them past the adaptation faze into a totally new phase called loss and damage. 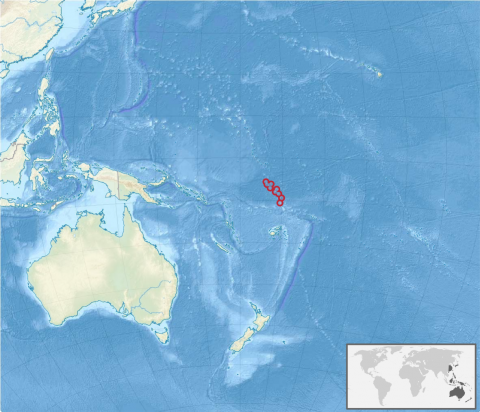 As ice caps melt across the globe, the sea level begins to rise which progressively drowns Tuvalu year after year. Because Tuvalu remains under 5 meters above sea level, as the sea level rises they lose more shoreline each year (Roy, 2019). When the tide is low they can resume life as normal but when there are high tides, extensive damage is caused throughout the land (Curtain and Dornan, 2019). The two most Urban atolls, South Tarawa and Funafuti, take the most damage with the high tides due to an overcrowding population (Curtain and Dornan, 2019). Low income housing and basic infrastructure take the brunt of the attack of the high tides because generally these are located in the areas with the lowest elevation in relation to sea level (Curtain and Dornan, 2019). With a sea that is progressively increasing, the risk of damage as a result of high tides is a recipe for disaster. It was found that in the waters surrounding Tuvalu they are experiencing around 1.2 millimeters of sea level rise each year (Patel, 2006). This is expected to increase exponentially with each year due to the rapid increase of glacial melt. In 2006 Tuvalu experienced some of its highest tides ever at the time, with tides around 1.5 meters above sea level (Patel, 2006). With this much tidal increase, much of Tuvalu’s coastal infrastructure was submerged. Not only is this an issue with infrastructure but it also causes the destruction of coral and the spreading of dead coral and other debris throughout roadways and walkways across the islands (Patel, 2006). Sea level rise is the root of the majority of the issues that small Pacific islands face, especially during high tides which is leaving a lasting impact on the food, the economy, and most importantly the people who call these places home. 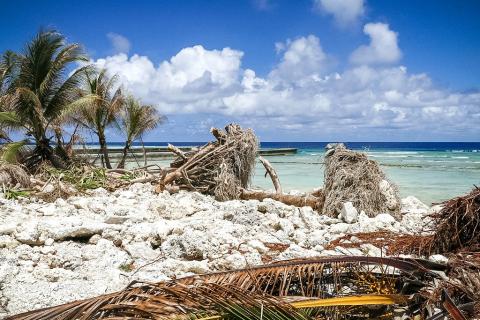 One of the places in which Tuvalu is most vulnerable as an island nation, is the threat of increased saltwater intrusion. Saltwater intrusion is when extensive amounts of saltwater seep through dirt, sand, and coral and cause having on the nations internal systems. Also, which is just as detrimental, saltwater flooding which is a result of the rising sea levels (Harman, 2014). Increasing saltwater flooding is destroying the agriculture in Tuvalu where they grow taro plants because the saltwater poisons the crops by drying them out causing them to die (Patel, 2006). An issue with saltwater intrusions is that the saltwater is beginning to seep into the groundwater in which the Tuvaluans rely on for their freshwater supply and is pumped out to irrigate their crops (Grundmann, 2016). Unfortunately saltwater intrusion is an inevitability because of the higher tides and rising sea level, this will only happen more and more (Farbotko, 2005). Another issue that is facing Tuvalu is the increase in algal blooms. The coral atoll helps protect the shoreline and part of what is causing the destruction of the coral is tropical storms such as cyclones. These cyclones cause a lowering of salinity and a change in sea level which damages the coral (Harmelin-Vivien, 1994). As the coral is progressively damaged, algal blooms begin to overtake the coral changing it to an algal dominated community which is detrimental to the species of benthic fish who reside in these corals (Harmelin-Vivien, 1994). The most recent algal bloom has been the growth of sargassum which leds to the inundation of coastlines (De Ramon N’Yeurt and Iese, 2014) (Schell et al., 2015). This is related to anthropogenic eutrophication and the raising of seawater temperatures (De Ramon N’Yeurt and Iese, 2014). These algal blooms are leading to a decrease in fish population which the people of Tuvalu rely heavily on as a main food source (Thelwell, 2020). 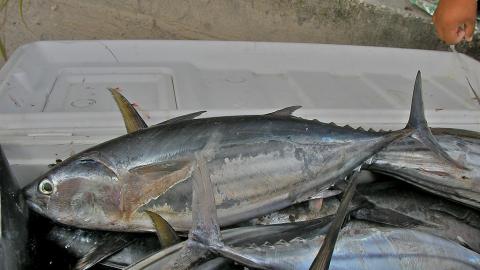 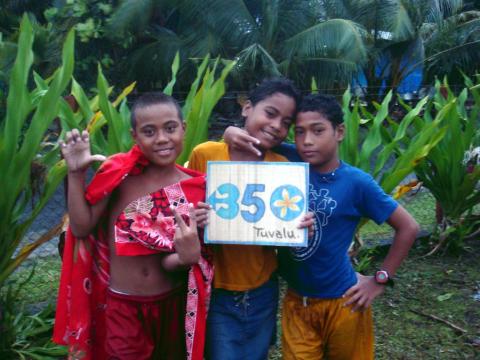 With all of these issues going on the government struggles on a daily basis to provide hope for the citizens of Tuvalu. Many of the people of Tuvalu as well as scientists have insisted the government implement a “no regrets” policy which means doing things for the nation despite sea level rise (Patel, 2006). This includes activities like introducing salt-tolerant crops to combat the saltwater intrusions as well as trash cleanup policies which is a “painfully slow” process (Patel, 2006). As these processes proceed it is becoming abundantly clear that they need to find a new home, and this ideal is taking its toll on the citizens of Tuvalu (Constable, 2017). Pacific islanders and Tuvaluans are suffering from severe mental health issues as a result of anthropogenic climate change (Gibson et al., 2019). There is a strong fear of losing their culture and identity with the changes going on in the Pacific Islands (Gibson et al,. 2019).  Mental health issues are created which is mainly due to the coastal erosion and the idea behind losing a bit of their home every year (Gibson et al., 2017). An NGO manager in Tuvalu said “we have our own culture and we want to maintain that [and]  just stay here” (Constable, 2017). This shows the mindset of the people and how hesitant they are to leave their homeland. With one of the biggest fears being loss of culture, Tuvalu fights to maintain underwater sovereignty in a worse case scenario (Booth et al., 2021). This is an attempt for Tuvalu to maintain sovereignty in the event that their island is submerged (Booth et al., 2021). This would help maintain culture while also leaving a positive outlook for the people of Tuvalu in respect to their culture.

As the world's emissions grow daily, Tuvalu is reaching a tipping point (Harman, 2014). Two of Tuvalu’s nine islands are on the verge of going under (Roy, 2019). Much of Tuvalu’s young people are advised to get educated elsewhere such as Fiji, Australia, and New Zealand (Roy, 2019).  There are a number of things Tuvalu can do to preserve their culture and their people. They have talked with Australia and New Zealand about potentially buying land for their people to live on if their land gets submerged (Constable, 2017). In 2019 Tuvalu denied an offer from China to build artificial islands because of their diplomatic ties to Taiwan (Lee, 2019). This shows how Tuvalu has not reached a point of complete desperation and is still valuing their moral duty. 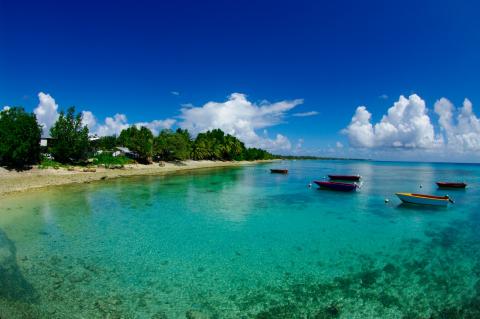 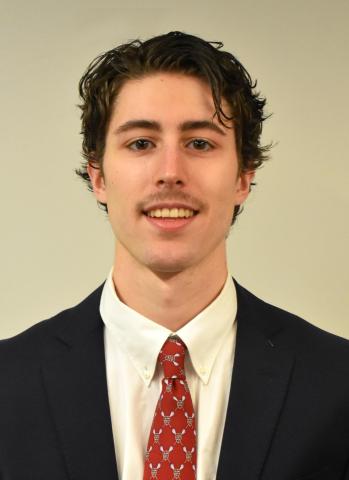 My name is Cody Sipher and I am class of 2023 at St. Lawrence University. I am an Environmental Studies major and I thank you for reading about Tuvalu.