Climate change is a multidimensional issue, the effects of which extend far beyond the ecological realm. In West Asia, increasing temperatures and a decrease in precipitation, which cause a large number of consequential impacts on humanity and the environment, could result in the region becoming literally uninhabitable. 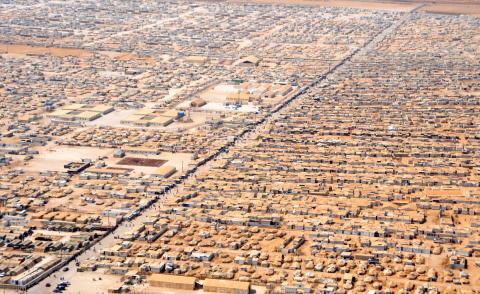 An aerial view of the Za'atri refugee camp, located in Jordan. This is an example of one of the many camps to which Yemeni refugees relocate amidst violence in their own country. Image: Wikimedia Commons 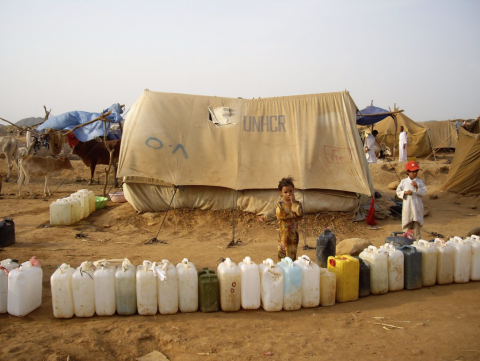 Climate change plays a large role in exacerbating the negative effects of Yemen’s ongoing civil war. Increased temperatures, a decrease in precipitation, and sea level rise all jeopardize the agricultural productivity, water resource availability, and human health in the region, which are already vulnerable due to poverty and conflict.

The wide-reaching effects of this environmental phenomenon are so complicated and multi-scalar that the full extent of its implications have yet to be discovered. 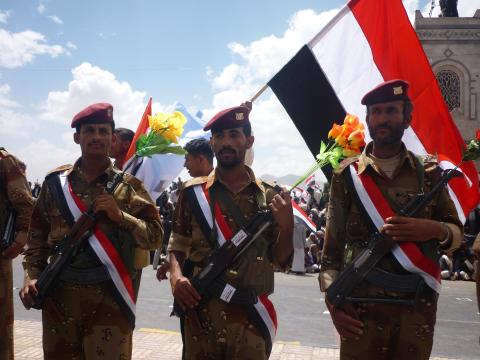 The current conflict in Yemen began when, in 2011, the longtime authoritarian president, Ali Abdullah Saleh, ceded power to Abdrabbuh Mansour Hadi. Where this political transition was supposed to bring stability, it brought crisis (BBC News, 2018). A rebel group known as the Houthis acted upon the insecurity of the new regime and took control of a major province, Saada, as well as the capital, Sana’a (Foster, 2019). The intervention of multiple other actors, including Saudi Arabia, al-Qaeda militants, a southern separatist group, and the United States, have complicated this ongoing conflict further. 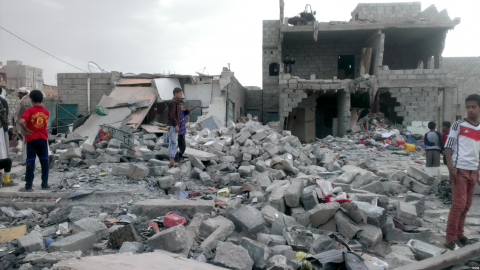 Months after a 2015 airstrike on a neighborhood populated by black Yemenis, more than one hundred buildings still remain in rubble and survivors continue to search for any lost valuables. Image: Wikimedia Commons

Labeled by the UN as the “world’s worst man-made humanitarian disaster” (BBC News, 2018), this conflict has had widespread impacts on the civilians in the country. 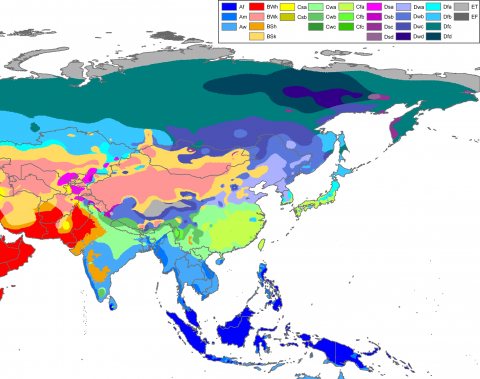 North Africa and the Middle East

In North Africa and the Middle East, temperature increases could become so severe that climate change could make sections of this region “uninhabitable” (Frangoul, 2016). 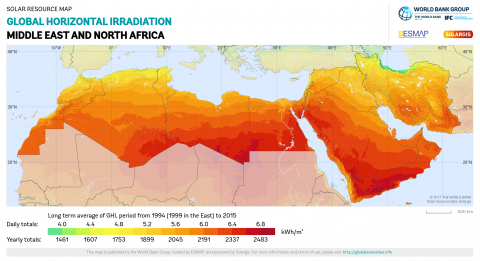 This figure depicts the global horizontal irradiation, which is defined as the total amount of shortwave radiation received on a horizontal surface, for North Africa and the Middle East. Image: Wikipedia

A map of Yemen including its capital, Sana'a. Image: Wikimedia Commons

Yemen is an arid country located in the Middle East, surrounded to the south and West by the Red Sea and Gulf of Aden and to the north by Saudi Arabia and Oman. It is defined as a hot, desert climate (Chen and Chen, 2013). The country's regional location increases the exposure of citizens to unique climate change risks. 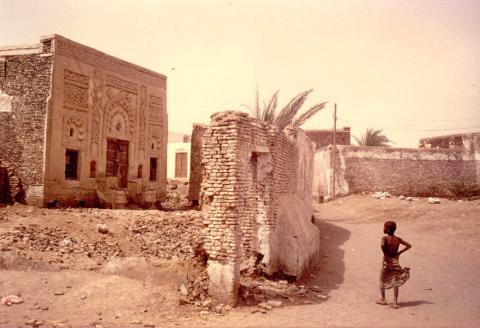 Zabid, Yemen, is one of the country's oldest cities as well as a World Heritage Site. This city has recently been placed on the List of World Heritage in Danger due to poor conservation efforts. Increased temperatures may drive citizens out of this city, leaving it to deteriorate further (UNESCO, n.d.). Image: Wikimedia Commons

Yemen is likely to experience significant changes in its average temperatures, precipitation, and sea level, all of which will exacerbate the effects of the social, economic, and political issues millions of citizens already face.

Yemen's average temperature is expected to increase by 1.2 to 3.3 degrees Celsius (USAID, 2016). The prospective temperature spikes and rise in number of extremely hot days may result in water scarcity, a decrease in agricultural productivity, and severe human health risks. 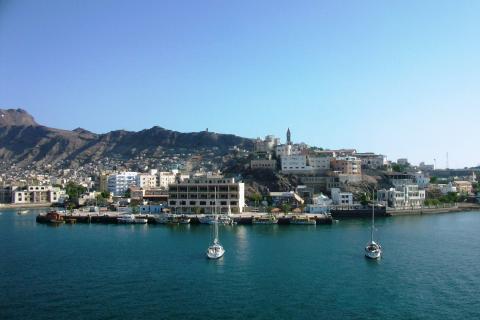 In 2016, flash floods caused by heavy rains inundated a number of districts in Yemen, including the critical port city Aden, pictured above. Overall, these floods killed 20 people and affected an estimated 24,000 (UN Office for Coordination of Humanitarian Affairs, 2016). Image: Wikimedia Commons

An increase in the intensity of precipitation events could lead to monsoon-like storms off of the Gulf of Aden, which would threaten coastal zones. In 2008, floods in southeast Yemen caused US$1.6 billion in damages and losses, which represented 6% of the country's GDP (Harazi, 2014).

Sea level is expected to increase by 0.3 to 0.54 meters by 2100 (Mohamed, 2017). This rise in sea level would put more than 50% of Yemen’s coastal areas at risk and affect more than 55% of the country’s coastal population (USAID, 2016). Sea level rise will also result in saltwater intrusion, rendering coastal aquifers brackish and undrinkable and exacerbating the country’s already-serious water scarcity issues (Harazi, 2014).

The three main areas of Yemeni society that will be impacted by the physical consequences of climate change are agricultural productivity, water resource availability, and human health, each of which is outlined below.

Increased intensity of extreme weather events will lead to both soil erosion during periods of high precipitation and also desertification during periods of particular dryness, which could lead to a 3-5% loss in already-scarce arable land (USAID, 2016). This loss of productivity may exacerbate the conditions of those who are already food insecure. 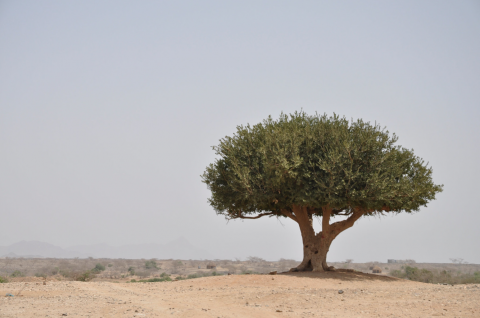 Groundwater levels are plummeting by 6 meters per year in some regions (Harazi, 2014), and the continuity of water depletion is expected to reduce agricultural productivity by up to 40% (USAID, 2016). A recent increase in reliance on water-intensive crops (Werrell et al. 2016), coupled with failed governmental management of water resources has furthered this scarcity (UNDP, 2012) and will have devastating impacts for those located where conflict is most prevalent. 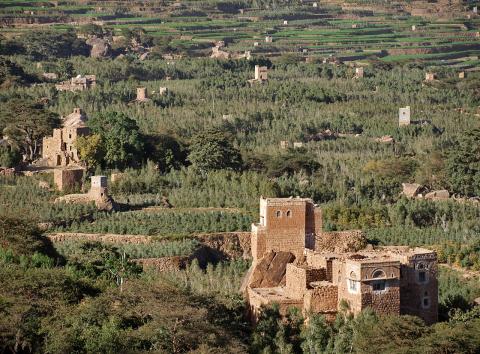 Qat cultivation in western Yemen. Qat is a mild stimulant chewed by many citizens, and it accounts for 37% of all water used in irrigation (Werrell, 2016). Image: Wikimedia Commons

Due to scarce water resources, Yemenis are often forced to drink contaminated water, which negatively affects their health (Mohamed, 2017). A large outbreak of the waterborne illness, cholera, has resulted in 1.49 million suspected cases and 2,960 related deaths since April 2017 (BBC News, 2018). Not only that, but the ongoing conflict, coupled with climate change impacts, has worsened the aforementioned water scarcity and food security issues, leaving 2 million people, 1.3 million of which are children, malnourished (USAID, 2016).

The progression of Yemen's cholera outbreak between 2017 and 2018. Image: Wikimedia Commons 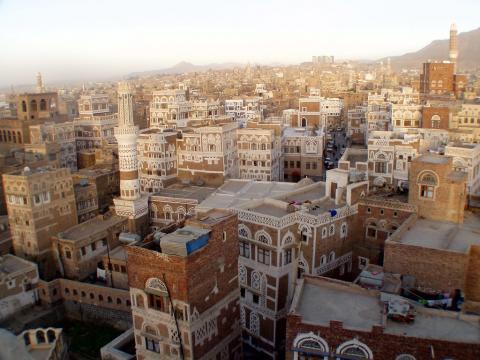 The capital of Yemen, Sana'a, is targeted for to airstrikes due to its political significance and population density. Image: Flickr

Sana’a, the capital of Yemen, is particularly vulnerable to climate change. Given its political significance, the capital has become a primary target for Saudi airstrikes. The city’s population density averages to about 36,300 citizens per square mile ("World's Capital Cities", n.d.), so airstrikes on the capital city endanger those uninvolved in the conflict, causing frequent injury and death to civilians. Not only that, but Sana’a has been labeled as one of the top-ten water scarce cities in the world (Mohamed, 2017), as its groundwater is depleting by 1-7 meters per year (USAID, 2016). At this rate, groundwater reserves will be emptied in 20-30 years, regardless of climate change (USAID, 2016).

In April 2009, the government of Yemen, in partnership with the Global Environmental Facility and the United Nations Development Programme, published their National Adaptation Programme of Action (NAPA) (Republic of Yemen, 2009). In doing so, the government sought support from the international community to promote sustainable development.

The goals were outlined as such:

After establishing a list of major vulnerabilities faced by the Yemeni population, the government was able to condense their needs into twelve main projects. 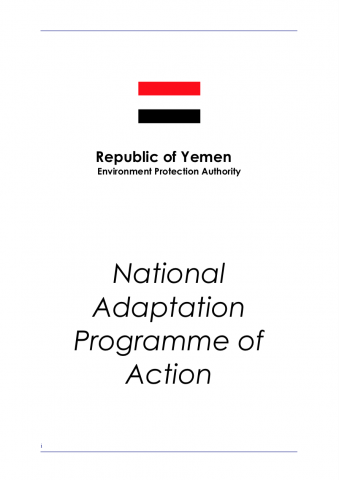 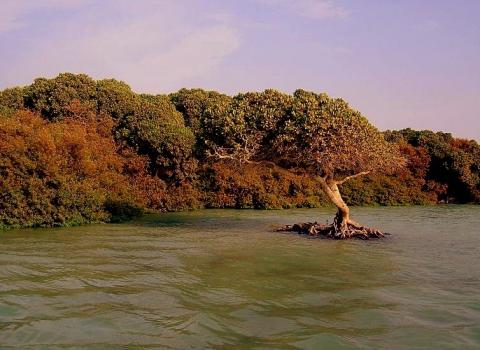 The following are the adaptation projects most relevant to the aforementioned physical and social impacts of climate change: 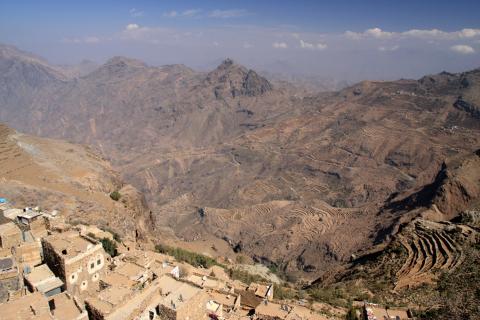 Unfortunately, two years after the NAPA was published, the presidential overturn occurred, resulting in the current civil war. Therefore, there has not been much progress in regard to climate change adaptation in Yemen. Outlining the adaptation plan in 2009 has increased the resiliency of their government by providing a necessary framework for climate change adaptation strategies in Yemen, however, barriers to the implementation of a new NAPA remain. These include:

Additionally, the dramatic financial, cultural, and psychological costs of the civil war have resulted in an understandable lack of public incentive to prioritize climate change adaptation strategies. Therefore, it remains difficult to consider the implementation of any adaptation measures prior to addressing the volatile social and political climate.

Still, the government must eventually reassess their outdated adaptation plan to incorporate the changes the country has undergone in the past years in an attempt to combat the ongoing negative effects of climate change. This updated plan should incorporate critical aspects of adaptation on a local scale, including:

Though the end of the civil war remains unknown, the harsh reality of climate change for Yemenis is not. Therefore, citizens must understand the catastrophic consequences of climate change if any significant adaptation is to be completed.

Update: On April 16th, 2019, President Donald Trump made the decision to veto a bill that would have ended U.S. involvement in the Yemeni war. Throughout the conflict, the United States has helped its Saudi-Arabian allies through arms sales and targeting support for Saudi airstrikes. This decision means that the Saudi-backed war that has killed tens of thousands and resulted in a dire humanitarian crisis will continue unabated (Sonmez, Dawsey, and Demirjian, 2019).

Georgia Grzywacz is an Environmental Studies and Sociology combined major at St. Lawrence University, Class of 2020. She studied Yemen for Dr. Jon Rosales's Adapt: Climate Change course during the Spring 2019 semester. Georgia became interested in Yemen after discovering the ways in which climate change can contribute to conflict and exacerbate its effects. 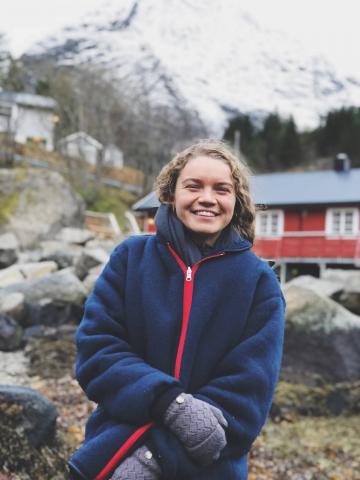